A common technique used by attackers in crafting malicious emails is to repurpose legitimate, authentic content in order to persuade a recipient to click a link or open an attachment that launches a hidden exploit. Often such content is taken from official announcements, websites of nongovernmental organizations, or publicly-available media such as news sites, and repackaged within an email that includes a malicious attachment or link. For example, malicious emails have circulated attaching content such as an invitation to the 2010 Nobel Peace Prize ceremony and statements made in international fora.

Recently, attackers targeting the Tibetan community have seized on a relatively high-profile document to incorporate in targeted malware efforts: the June 14, 2012 resolution of the European Parliament (EP) on the human rights situation in Tibet, which references the 38 Tibetan self-immolations that had occurred as of that date, and calls on the Chinese authorities to take action to respect and protect Tibetan rights.

While such a tactic is not unusual, it does raise a number of questions surrounding the use of legitimate political resources for illegitimate purposes, and the modus operandi of the attackers in this particular circumstance. Indeed, one effect (and perhaps purpose) of attacks such as this is to undermine the impact of the original content; here, an EP resolution designed to promote Tibetan rights was used as bait to compromise those very same rights, resulting in a chilling effect whereby the Tibetan community is discouraged from circulating information on the resolution, which is now associated with malware. In this report, we review some technical details of the targeted malware attack, and make recommendations regarding consideration of targeted cyber threats against civil society.

On June 15, 2012, an email with the subject “FW: the new decision of EUROPEAN PARLIAMENT about tibetan human right in China” was sent to over 80 unique email addresses, targeting individuals active in the Tibetan rights community. A screenshot of the email, submitted to the Citizen Lab for analysis, is included below: 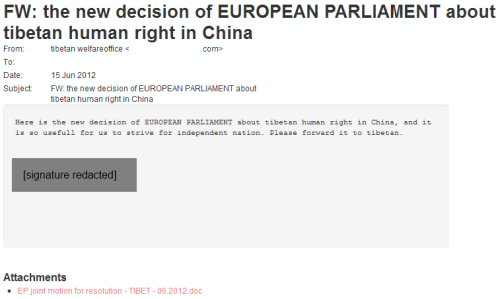 The body of the message reads:

Here is the new decision of EUROPEAN PARLIAMENT about tibetan human right in China, and it is so usefull for us to strive for independent nation. Please forward it to tibetan.

The address in the “From” header of the email appears to be from a legitimate Tibetan organization — likely a compromised web mail account, with the recipients of the attack perhaps coming from the account’s contact list.

It is noteworthy that, while the text of the malicious email references the European Parliament (EP) decision of June 14, the attachment itself is actually the precursor to that resolution, namely, the EP’s joint motion for resolution of June 12, 2012. The use of that document instead of the resolution proper is likely the result of the availability of that file in a prepackaged, downloadable Word document format on the EP’s website; by contrast, as of June 20, 2012, the June 14 resolution was not available as a separate downloadable document, and was displayed only in HTML on the website. 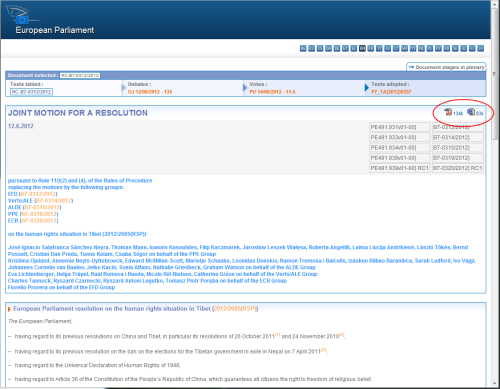 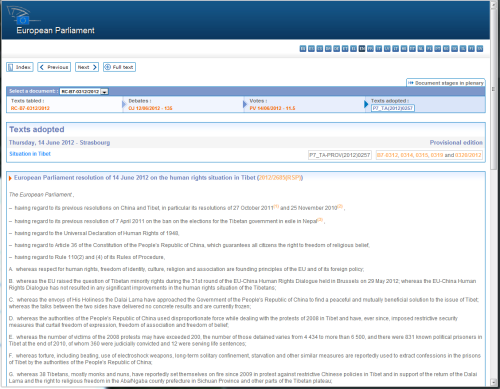 Resolution does not have .doc available

The attachment to the malicious email is a Microsoft Word document titled “EP joint motion for resolution – TIBET – 06.2012.doc” with the MD5 signature 81f3a6e7a73a9845c6eb9a3d46597223. When the attachment is opened, Word briefly displays a document that contains the text “111111111” while exploiting the Microsoft Word vulnerability and dropping several files that are embedded in the attachment. 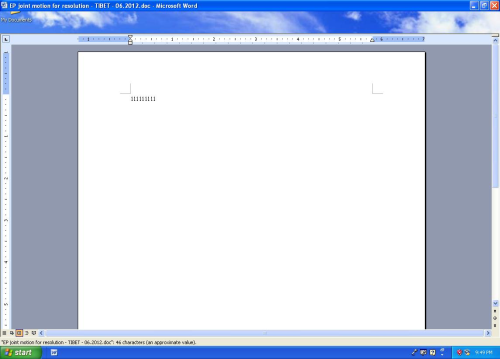 The original file then closes and Word opens a clean document (dropped in the user’s temporary directory with the same filename) that contains the full text of the joint motion for resolution, in a version that is identical in appearance to the document downloadable from the EP website. 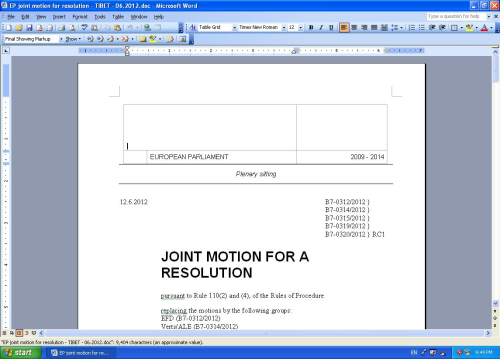 While the file is nearly identical to the Microsoft Word file that can be downloaded from the European Parliament’s site, the metadata in the documents differs in interesting ways:

Such details suggest that the attacker was in this instance familiar with the work of the EP regarding the Tibetan human rights situation: he or she was aware of the joint motion for resolution; may have downloaded a copy of the document on June 13 (per the create time/date metadata), the day after the joint motion was released, and embedded it in the new malicious file “EP joint motion for resolution – TIBET – 06.2012.doc”; and may have held onto that file deliberately, waiting to circulate it until June 15, the day after the resolution to which it corresponds was officially adopted — perhaps timed for when the document would attract the most interest.

As the clean file is opened, malicious code executes and communicates with a command and control (C2) server located in Hong Kong. The IP address of the C2 server is the same as the one used to send the targeted email from the web mail account: 114.142.147.51. This is a static IP address on DYXnet (a Chinese Internet service provider). The domain name vv338.com also points to this IP address; however, the malware does not perform a DNS lookup and there is no evidence that whoever registered the domain is associated with this attack.

The dropped executable code is the same as that described by Symantec in a May 24, 2012 blog post, which details a targeted attack also incorporating Tibet-related themes. The exact filename of the original dropped executable is different (NvDev.exe instead of NvSmart.exe), and was likely changed to avoid antivirus detection. The program has a valid digital signature because it is a legitimate program, which loads and calls code from a companion DLL (dynamic link library). In this case, the attackers have provided a fake DLL which contains the malicious code. This technique, known as “DLL Hijacking,” bypasses warnings that a program is not digitally signed — which may be a warning to the user that something is not right.

Below are screenshots of the payload code (in the malware referencing the EP resolution, in BOOT.LDR; in the malware from the Symantec post, loaded from an executable). Aside from the addresses being different, the code is the same. 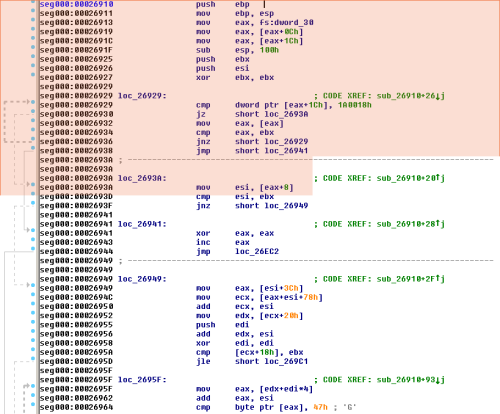 Code dropped by the HHDLschedule.doc malware described by Symantec. 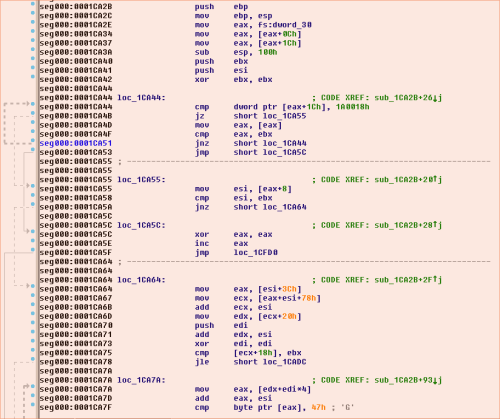 This attack demonstrates the ease of repurposing legitimate content in a manner that is likely to appear authentic to, and prompt the interest of, the intended target of the malware. It also raises serious questions concerning misappropriation of the intellectual property and political resources of public entities — in this case, utilizing an EP resolution to compromise the Tibetan community, the very individuals the EP, on behalf of European citizens, sought to protect. The Citizen Lab recommends: